.”Mediaș Synagogue – a page of history”

The Romanian Cultural Institute (RCI) in Tel Aviv is organizing, on September 24th, 2020, starting with 18:00 hours, in a new edition of the "Romanian Cafe" online, held via live streaming on the official Facebook page of RCI Tel Aviv –   https: //www.facebook.com/icr.telaviv/ , an event dedicated to the Jewish cultural heritage in Mediaș and the attempts to capitalize on this legacy, called “Mediaș Synagogue – a page of history”.

Moderated by Martin Salamon, director of RCI Tel Aviv, the event, held in English, will include journalist Iosif Klein Medeșan, together with Julie Dawson and Alexanda Toma, representatives of the Fanny Bäumel Association / The House by the Synagogue in Mediaș, and will address topics such as: the history of the Jewish community in Mediaș and its most important members throughout time, the efforts to preserve the Jewish heritage undertaken by the House by the Synagogue, as well as its efforts to raise public awareness regarding the matter. Photo and video materials from the restoration process will be shown during the event. Furthermore, the event is a good opportunity for the members of the community of Mediaș-born Israelis to find out more details about the restoration of the Synagogue and to offer their support.

The Mediaș Synagogue has slowly came back to life, due to a project aiming to preserve and digitize the archives of the former Jewish community, and to the valuable support of the Mediaș inhabitants. Thus, in May 2014, the team from The House by the Synagogue started a project meant to preserve the archive, a first step towards bringing the Synagogue back into the life of the city as a museum, community center and cultural space. The first projects carried out by The House by the Synagogue team, between 2014-2017, were administered by the Mihai Eminescu Trust Foundation and aimed at preserving the Jewish heritage of the Mediaș Synagogue.

The project "TRACES - Transmission of contentious heritage through the arts" took place between 2016 and 2019 and was funded by the European Commission, under the Horizon 2020 Research and Initiative Program. In parallel with these projects, workshops for students and pupils, both from the local community but also in national camps, were organized, as well as cultural events for the Mediaș community. Another project carried out was “The Future of Memory. Learning about the past for a better future”, a project initiated by the UMA ED Bucharest Association.

Born in Mediaș, Iosif Klein Medeșan is a well-known journalist who has worked for Voice of America, the BBC and Free Europe. In Romania, he worked, among others, on Național TV, and newspapers Puterea and România liberă.

Julie Dawson is the initiator of The House by the Synagogue’s projects, project director, researcher and archivist. Also she is the primary researcher for the Leo Baeck Institute’s long-term JBAT project. 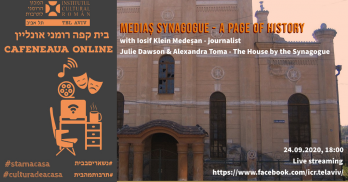