Who said that only Kafka is lacking in our challenging reality? What is  really needed is Czech films –bright, phycological and sarcastic. So please find:

Czech Film week will be held from 14.08 till 31.08 in five cinematheques in Israel: Jerusalem, Tel Aviv, Haifa, Herzliya, Holon ( At the beginning only three were included, but it became clear, more cities are interested).

Robert Mikolas, director of the Czech House Jerusalem, former Army correspondent of Radio Prague in the Middle East, and a writer with ironic tough to the life has choose six films to caught many. (Recently he wrote with bitter irony that at least one positive expectation of the corona lockdown, to create a baby boom, was shattered by the reality that it has led to a divorce boom, as people are afraid of being infected. So we really need humor these days, he asserts.)

The festival opens with CHARLATAN, the new film by acclaimed director Agnieszka Holland on August 14 at 19:30 at Jerusalem Cinematheque. Ivan Trojan, winner of four Czech Lions for best actor in a leading role, stars in the biographical drama about faith healer Jan Mikolasek will open the festival. The following day, August 15, the opening ceremony will take place at the Cinematheque in Tel Aviv. The festival will open in Haifa on August 16.

After the big success of Burning Bush devoted to the tragic figure of Jan Palach, Agnieszka Holland  turned to the Czech history again.

Jan Mikolášek was a very famous healer, an unusual medicine man, who was using unorthodox methods of diagnosis and treatment. Those special skills made him not only well known but also rich. In Czechoslovakia before World War II, he became some kind of institution and even during the German occupation he was able to preserve his status by healing high Nazi officials. He was sure that it would not be different after the war. The communists who took power were also humans. And humans fell sick, felt hopeless and needed the doctor; a special kind of a doctor as well, when others cannot help. But the situation changed when his main Stalinist protector died, and the regime decided to destroy him. He was too different, too rich, and too independent. The film already received four Czech lions.

Director Petr Zelenka, master of the black humor brings to Israel his new film DRONMEN (2020), a psychological thriller. Zelenka prefers provocative plots related to politics. “I am proud by the Czech explosives and the Czech hockey” – said one of the film hero. In the center the story of an attempt to assassination on Dick Cheney. The film was party shot in Israel.

Retrospective of the New Czech wave (Czech spring) films is here. COACH TO VIENNA (1966, directed by Karel Kachyňa) was called by the authorities "disgraceful ideological mischief”. For ideological reasons the film was denounced as "disgraceful ideological mischief", anti-Czech, anti-German, and anti-partisan. Kachyňa had to go into exile in …Austria ( What to do: the authorities did not have their Siberia…) Iva Janžurová, one of the best Czech actresses of all time, who played the leading role in the film  is celebrating her 80th birthday this year.

Next is the comedy ECCE HOMOLKA (1969), directed by Jaroslav Papouše, who worked with famous Milos Foman,

The documentary and the documentary ANTONIN DVORAK (1990) by Jaromil Jires did not easily paved the way to TV, for beying not modest enough. Now when the world celebrates 180 years from his birthday, it`s OK already.

Photos courtesy of the Czech  Embassy

. The Romanian Cultural Institute in Tel Aviv invites you to the online screening of the Romanian film “Freak show.

The Romanian Cultural Institute in Tel Aviv invites you to the online screening of the Romanian film “Freak show. The Movie”, an adaptation from the theatre show created by Florin Piersic Jr. The event is part of the program of the 11th edition of Beer Sheva International Fringe Theatre Festival, which will take place online and live between July 26-29, 2021 on the festival website (international program) and in the Old City and the Beer Sheva Fringe Theatre.

Directed, written and performed by Florin Piersic Jr.
Synopsis: Based on the one-man-show written, directed and played by Florin Piersic Jr. (one of the best performers in Romania), Freak Show.The Movie is a mesmerizing journey through the lives of the different characters imagined by the main (and only) actor. Each story has comic and tragic nuances, peering into the most uncomfortable parts of humanity. The result is a feature film which feels like you're a in a bumper car speeding up and crashing over and over again. 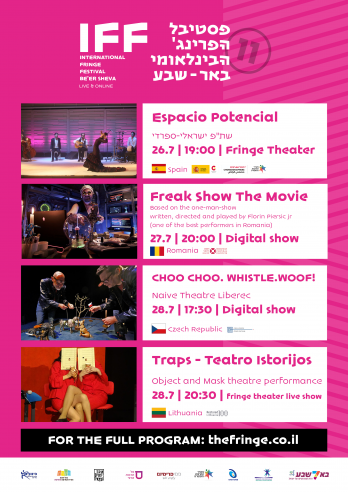 Photo courtesy of the Romanian Cultural Institute in Tel Aviv

The Western Wall Heritage Foundation and the Israel Antiquities Authority are enabling the public to view impressive new sections of one of one of the most magnificent public buildings uncovered from the Second Temple period. The discovery – the fruit of archaeological excavations recently conducted in the Western Wall Tunnels – will be part of the new route opened to visitors ahead of Rosh Chodesh Elul and Slichot (Penitential prayers).

Part of the structure, to the west of Wilson’s Arch and the Temple Mount, was discovered and documented by Charles Warren in the nineteenth century, followed by various archaeologists in the twentieth century. Now that its excavation is complete, we know that it contained two identical magnificent chambers with an elaborate fountain between them. The walls of the halls and the fountain were decorated with a sculpted cornice bearing pilasters (flat supporting pillars) topped with Corinthian capitals. The decorative style of the building is typical of opulent Second Temple-period architecture.

Mordechai Soli Eliav, Chairman of the Western Wall Heritage Foundation says, “It is exciting to reveal such a magnificent structure from the Second Temple period while we mourn the destruction of Jerusalem and pray for its restoration. These chambers are part of a new walk through the Western Wall Tunnels, where visitors will view fascinating finds and walk for the first time along the entire route among Second Temple-period remains that illustrate the complexity of Jewish life in Jerusalem between the Hasmonean and the Roman periods.”

According to Dr. Shlomit Weksler-Bdolach, Excavation director on behalf of the Israel Antiquities Authority, “This is without doubt one of the most magnificent public building from the Second Temple period that has ever been uncovered outside the Temple Mount walls in Jerusalem. It was built in around 20–30 CE. The building, which apparently stood along a street leading up to the Temple Mount, was used for public functions – it may even have been the city council building where important dignitaries were received before entering the Temple compound and the Temple Mount. Visitors to the site can now envisage the opulence of the place: the two side chambers served as ornate reception rooms and between them was a magnificent fountain with water gushing out from lead pipes incorporated in the midst of the Corinthian capitals protruding from the wall. The excavation also uncovered the original massive stone slabs with which the ancient building was paved. The archaeologists believe that the guest rooms, which were also used for dining, contained wooden reclining sofas that have not been preserved.

Reclining dining rooms were common in the Greek, Hellenistic, and Roman worlds from the fifth century BCE to the third–fourth centuries CE. They are known in the archaeological record from private homes, palaces, temples, synagogue complexes and civilian compounds. Dining or feasting while reclining is mentioned as early as the Book of Amos – in the first half of the eighth century BCE – when the prophet rebukes the people of the Kingdoms of Judah and Israel.
In the late Second Temple period, before the Temple’s destruction, extensive changes made throughout the area included alterations to the building, which was divided into three separate chambers. In one of the chambers, a stepped pool was installed that was used as a ritual bath.”

Shachar Puni, architect for the Israel Antiquities Authority’s Conservation Department explains, “The new route provides a better understanding of the complex and important site known as the Western Wall Tunnels, while emphasizing the extent of this magnificent building. It creates a new visitors’ route that passes through the building and leads to the spacious compound at the foot of Wilson’s Arch (one of the bridges leading to the Temple Mount), which was also excavated by the Western Wall Heritage Foundation and the Israel Antiquities Authority. By making the route accessible and opening it to the public, visitors are introduced to one of the most fascinating and impressive sites in the Old City of Jerusalem.”

-Remains of the magnificent 2000-year-old building recently excavated and due to be opened to the public.

In 1991 (that seems so last-century, but only 30 years ago), the ambassadors of three countries – Hungary, Czechoslovakia and Poland – established the so-called Vicegrad group, recalling an historic event stretching back to the mid-1300s.

Now four countries are involved: The Czech Republic, The Slovak Republic, Hungary and Poland. Last week, in a moving ceremony at the Jerusalem Cinematheque, the Ambassador of Poland, His Excellency Marek Magierowski, handed over the presidency of the V4 to His Excellency Levente Benkő, Hungary’s Ambassador to Israel.

Invitations to the diplomatic community were issued by the cultural attaches of the four embassies, and also by the Ceské Centrum and the Polish Institute.

Guests were treated to a beautiful cocktail reception, followed by screenings of four animated films: A Heligoland Romance, Love, Acid Raw and Yellow.

An unusual diplomatic event on the Israeli scene, hopefully to be repeated more often.

Ambassador of the Republic of Poland, Mr. Marek Magierowski and HE the Ambassador of Hungary, Mr. Levente Benkő.


For those yearning to resume international travel, the Embassy of Kazakhstan offers the next best thing--a taste of travel abroad brought home. On Thursday evening the embassy inaugurated a traditional Kazakh Yurt, as part of the National Day of Dombra festivities.


Yurts have played a central role in the nomadic lifestyle of Central Asian people for millennia, and are included on the UNESCO list of cultural heritage of humanity. But it is thanks to the embassy of Kazakhstan that a traditional Yurt can now be visited by all, in the heart of Tel Aviv.


Ambassador Satybaldy Burshakov opened the Day of Dombra festivities by discussing the rich heritage that the Yurt stands for: “peace, unity of the nation and family, traditional hospitality and openness.” In a finely embroidered traditional gown, the ambassador noted that the Shanyrak - the top of the yurt, the roof window and the hole for ventilation, can be seen on the National Emblem of the Republic of Kazakhstan.

Discussing the warm ties between Kazakhstan and Israel, the ambassador explained that during Holocaust thousands of Jews found shelter in Kazakhstan and neighboring countries of Central Asia, and then become contributors to scientific and cultural development of Kazakhstan. Leaping forward, Ambassador Burshakov stressed that in the thirty years since independence, “Kazakhstan made a great journey and now it is a dynamic modern state which successfully transitioned from lower-middle-income to upper-middle-income status in less than two decades.”


The evening was truly a cultural and artistic celebration, and guests were delighted to enjoy live musical performances from traditional Kazakh instruments, and with singing as well. Traditional sweets were served as well.

written by Abai Kunanbayuly, a great Kazakh poet, enlightener, philosopher and public figure of the second half of the XIX century, was translated to Hebrew by the Kazakhstan Embassy on the occasion of the 175 Anniversary of Abai and was presented to the public for the first time. The ambassador thanked translator Polina Brukman and Alla Serebrinskaya, the Director of Beit Nelly Media publishing company for their great contribution to this noble project, and presented certificates from the Minister of Culture and Sports of Kazakhstan Mrs Raimkulova.

Good to know about the holidays
A number of key Jewish holidays – some of which are full legal holidays in Israel – will take place this year between September...
Read More...